Holland America has been building  great ships for cruise vacations for 138 years. The ms Nieuw Amsterdam is no exception.

In our last article, we wrote about the four ships that have proudly borne the name ms Nieuw Amsterdam. We also reviewed the many on-board dining options available to passengers.

Today, we complete our story by listing a multitude of other on-board amenities. We also want to give prospective cruisers some insight into a ship’s crew – and how they contribute to a memorable cruise. 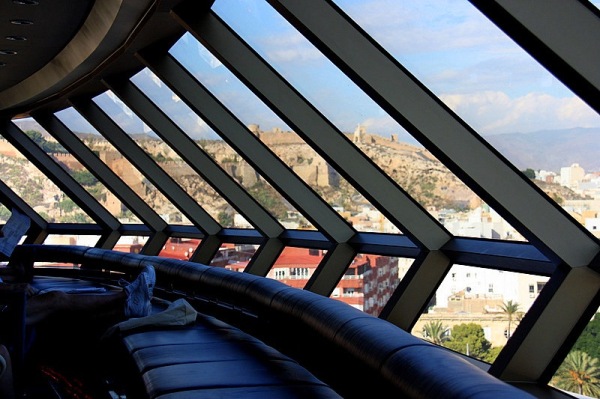 Starting at the top – on deck eleven – there is an Observation Room with a forward-looking 180-degree vista.

At this location, there is a coffee bistro, a bar, and an excellent library, with books, newspapers, and magazines. 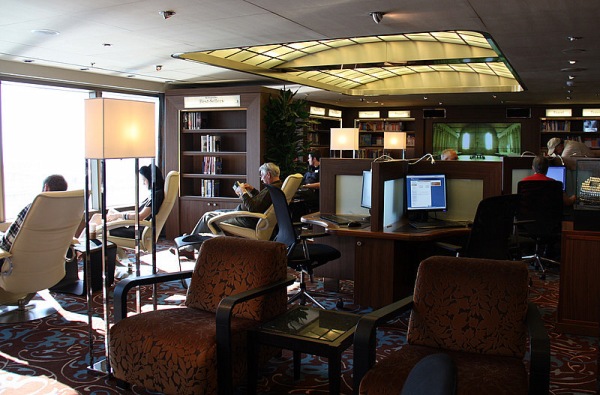 There is also an Internet Café, game tables, and numerous easy chairs.

One deck down, Club HAL (Holland America Line) provides supervised entertainment for the 3 to 12 set. The Loft is not far away and is a comfortable lounge where teenagers can meet and mingle, and play age related games. The Loft’s unique New York design is complete with street signs, a Yellow Cab, and a Hot Dog Stand. 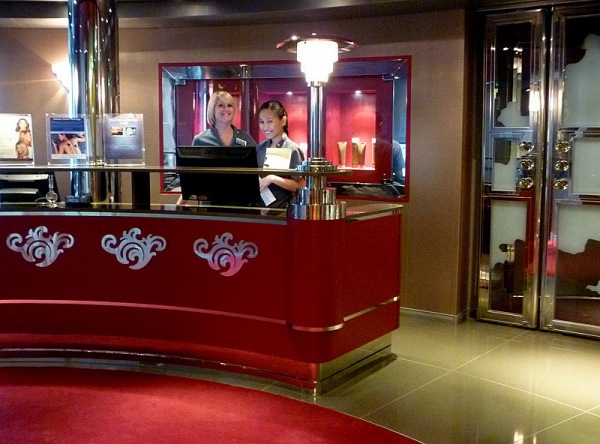 There is a fully equipped Fitness Center and Spa and Salon on deck nine where you can completely immerse your mind and body into a retrofit, or just rejuvenate and relax.

If you are tired from a hard day at sea, enjoy a movie in the ship’s 36-seat Screening Room – on deck three – and, it’s complete with cushy-chairs and free fresh and delicious popcorn. 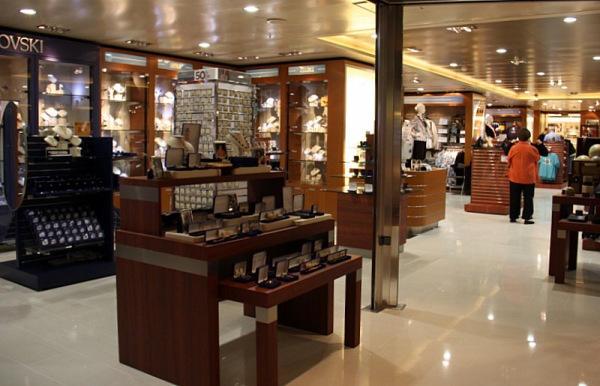 Also on deck three, and after your workout or spa-treatment, you might like a go at upscale shopping in the ship’s Signature Shops –

or try your luck at the slot machines and gaming tables in the glittering Casino on deck two.

If you like to cook, the Food and Wine magazine Culinary Arts Center on deck two will be a big hit. There you will find a state-of-the-art demonstration kitchen where gourmet-cooking lessons are provided by celebrity food preparers and the ship’s own master chefs. 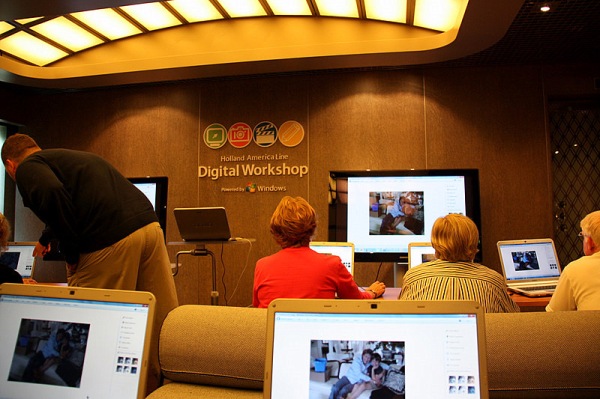 As the sun goes down, many of the day activity rooms magically morph into exciting cabarets, and like the other lounges situated throughout the ship, many offer passengers the opportunity to dance the night away. 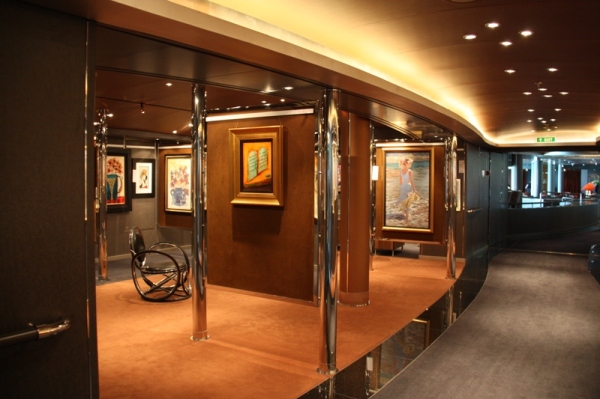 While on board, you can view and purchase your captured exploits at the ship’s extensive photo gallery on deck three, and don’t miss the fine art gallery where treasures are for sale and auction.

If for some reason you would prefer to spend your ocean holiday in your stateroom, you might enjoy a long soak in your cabin’s tub and pamper yourself with the provided Elemis bath amenities. After a slow dry with a plush Egyptian cotton towel, slip into a waiting deluxe terry cloth robe. You might then pop one of the thousand or so ship’s library DVDs into your flat panel wide-screen TV.

To complement your relaxation and entertainment, may we suggest a beverage from the mini-bar and a snack or full meal from the complimentary room service menu. La bonne vie!

Holland America has an extensive array of port tours for passenger enjoyment. A good reason to avail oneself of on-board tour booking is safety. Another is that the contracted operators know when you need to be back at the ship for departure. Yes, it can happen.

Live entertainment on board 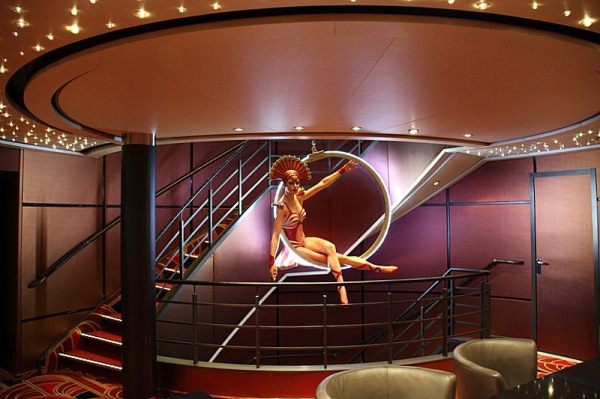 We have been on many cruises, and after awhile the stage productions on cruise ships tend to do a mental merge – but not on this cruise on the Nieuw Amsterdam.

Group ensemble performers on cruise ships are selected randomly and put under various length contracts as individuals – which means, they work with many different people in the course of their engagements at sea.

The assembled performers in the stage productions on our Nieuw Amsterdam sailing were absolutely the best we have ever seen. The dancers and singers on board were exceptional to a person. Their physical attributes and artistic talent were well above what you would find on the average cruise.

Kudos to the HAL talent scouts responsible for bringing this amazing group together. Sorry, we have no pictures of the group in action. Photography of stage performances is not permitted for legal and safety reasons.

One possible explanation for the quality of the talent is that unlike some other lines, HAL does not require double-duty from its performers. That means you will not see professional artists performing “welcome aboard duty,” or running daily bingo. Cruises that require artists to do something other than perform tend to attract less experienced talent.

We took a particular interest in a vocalist named Laura Parkes. She has a fantastic range and superb stage presence. Laura hails from England. She has been performing on the cruise ship circuit for several years as a lead production vocalist, and aspires to Las Vegas Cabaret. If any of our readers are connected in Las Vegas, Laura could be your greatest find – drop us an email. 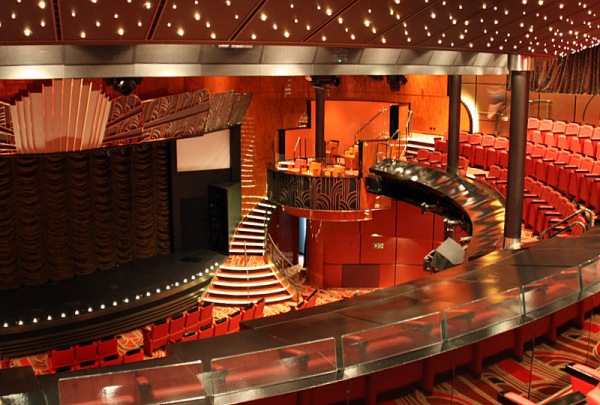 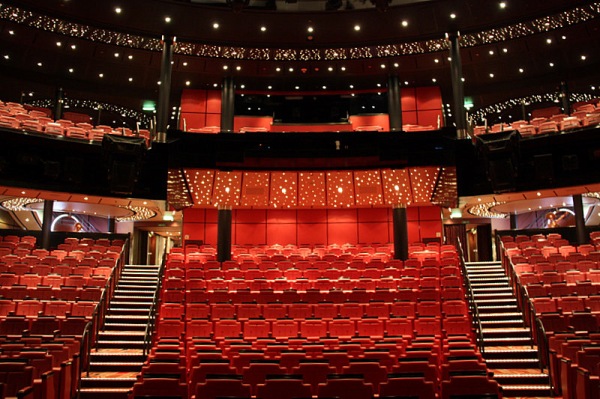 All this talent was supported by the ship’s backstage hands at the Showroom at Sea. This beautiful theater spans two decks, and the seats are most comfortable. The stage-sets in the Showroom were brilliant, and the costumes were professional, chic, and alluring. The Nieuw Amsterdam has the best of all of it.

A cruise ship is basically a floating resort hotel. Therefore, it only makes sense that the majority of shipboard employees would report to the Hotel Manager – who in turn reports to the Captain. At the time of our sailing, there were 868 crewmembers aboard the Nieuw Amsterdam. 756 of them reported to the Hotel Manager.

When we spoke to Mark Zeller, the amiable Hotel Manager aboard the Nieuw Amsterdam, we asked why he thought his ship was so well received by his passenger guests. He replied without hesitation, “It’s the quality of the crew.”

There are dozens of countries represented in the ship’s complement, but the vast majority of the service personnel come from Indonesia, Bali, and the Philippines – all countries whose people have reputations for being gracious, outgoing, and caring.

We found Mr. Zeller’s pride in his staff to be highly warranted, as the crew of the Nieuw Amsterdam was particularly delightful and friendly. We were not surprised to discover that Holland America has recruiting centers and training schools in both Indonesia and the Philippines.

Crew members aboard cruise ships work hard and are away from their families for long stretches. Typically, they sign on for a ten-month tour, and may rotate their assignments on several ships during their sea-going careers.

Captain on the bridge 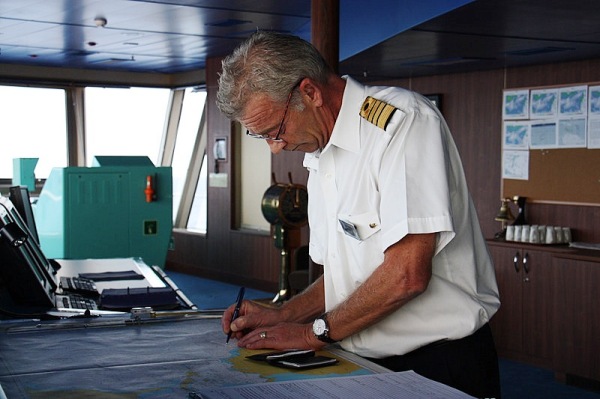 There is a common misconception that all Masters on Holland America’s ships are Dutch. Maybe they were at one time, but not now. Our cruise was under the able-command of  Captain Jonathan Mercer, who hails from Britain, and now resides in Florida with his American wife.

Captain Mercer is one of the most personable and visible ship’s Master that we have encountered during our many years at sea – meaning he was frequently out-and-about chatting it up with the guests in his domain – all of whom seemed delighted by the attention. 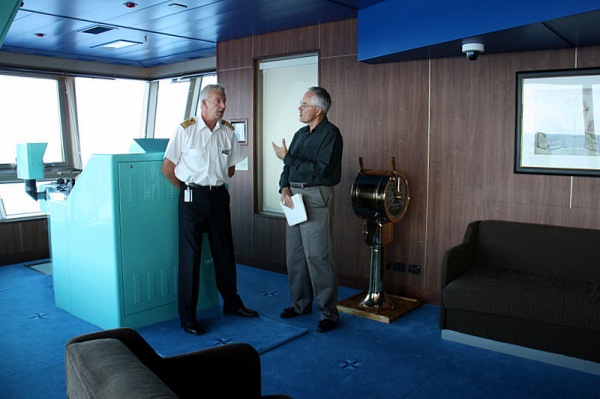 We had a stimulating interview with the Captain, and we think it would be hard to find a better ambassador for Holland America.

A few interesting facts about the ship. The Nieuw Amsterdam weights 86,273 tons, and is 936 feet long. She has 1,056 staterooms, and a crew of approximately 900. She can desalinate 500,000 gallons of potable water per day, and she consumes 75 gallons of diesel fuel per nautical mile. Her maximum speed is 24 knots or 27.62 miles per hour.

For more information about cruising on the Nieuw Amsterdam or any one of Holland America’s elegant ships, go to their website at www.hollandamerica.com or call your favorite travel agent.

We had a delightful flight from New York to Europe on Aer Lingus.

You can see the world with Google Maps. http://maps.google.com/