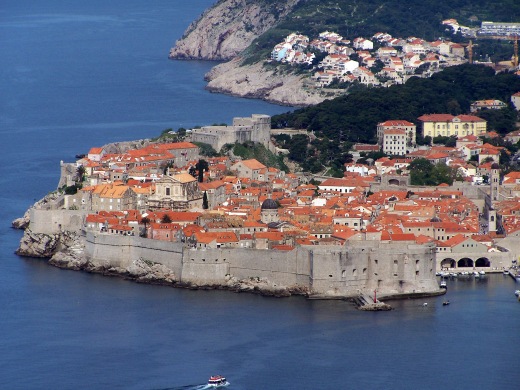 Established in the 7th century A.D., the ancient and scenic port city of Dubrovnik lies in the southernmost part of the Republic of Croatia, – almost directly across the Adriatic Sea from the “spur” in the boot of Italy. It is a beautiful city of colorful red-topped tile roofs and cobblestone streets, all of which looks very much like it did centuries ago.

The Pearl of the Adriatic

Among the city’s many admirers was Lord Byron who called Dubrovnik, “the Pearl of the Adriatic.” A century later the famous playwright, George Bernard Shaw proclaimed, “If you want to see heaven on earth, come to Dubrovnik.” If you visit Dubrovnik, you will see that it is indeed worthy of high praise.

To spend time in Dubrovnik is to feel the drama of a city tossed through time and finally settled in recent history as a place of peace and beauty.

The years have put many unique stamps on Dubrovnik. The city may very well be the world’s first planned community. As early as 1272, there was a town diagram, and in the following two centuries, the avant-garde citizenry opened a pharmacy (still in operation), a home for the aged, a quarantine hospital, and an orphanage.

Most extraordinarily, 74 years before Columbus discovered America, the aristocracy in Dubrovnik abolished slavery and slave trading. In honor of the visionary proclamation, they adopted a new flag that was seen throughout the trading routes of the world. Dubrovnik’s mighty fleet of merchant ships sailed under a white flag inscribed with the word Libertas (Latin for “freedom”)

Dubrovnik is renowned throughout the world as the “ancient walled city.” The wall that surrounds the city was originally constructed in 900 A.D. – and was further fortified in the 15th century. The wall, which is a popular walking attraction from which all aspects of city life can be viewed, is 1.3 miles long, 10 feet thick along the sea, and 20 feet thick elsewhere. There are substantial fortifications on all four corners. 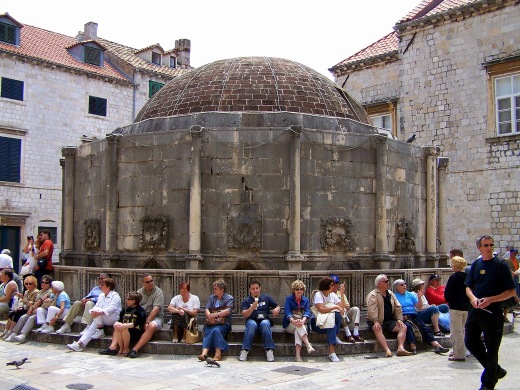 A cruise tour group rests at the ancient water cistern

Although some of the fanciful architecture dates back to the 7th century, most of the public buildings were rebuilt after a great earthquake killed 5000 residents, and leveled many dwellings in 1667. 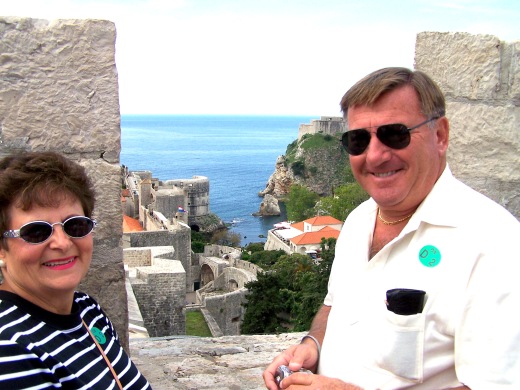 In the succeeding centuries, Dubrovnik suffered bombardment by a Russian fleet, and conquests by Napoleon, the Nazis, and Marshal Tito of Yugoslavia. In 1973, the old city declared itself a demilitarized zone in hopes that it would never again be a casualty of war. Unfortunately, fate was not yet ready to bestow peace on Dubrovnik.

In 1991, Croatia and Slovenia declared their independence from Yugoslavia, and on October 1, 1991, under a mantle of dispute, Serbians of the Yugoslavian People’s Army laid siege to Dubrovnik. Once again, the ancient city with so many historical treasures was barraged as if it were a common piece of dirt, and the rest of the world stood by and watched. The attacks lasted until May 1992 when the Croatian Army liberated the city.

Most of the damage from the latest conflict has been repaired. The renewed city has taken its rightful place as the jewel of the Adriatic – complete with storybook architecture and picturesque twisted streets and alleys.

We highly recommend Dubrovnik to photographers and tourists interested in antiquities, history, and architecture. The old city is a superb vacation site with an ideal climate and gracious and hospitable inhabitants – both to be enjoyed in a genuine fairytale setting.