At the turn of the 20th century, William Gillette was a renowned American actor and playwright. In 1914 he purchased a scenic 184-acre plot of land that overlooked the majestic Connecticut River in East Haddam, Connecticut.

On a ridge at the site, Gillette constructed a magnificent hand-tooled stone castle where he hoped to enjoy his retirement in the solitude of his estate.

Through the years, the strange-looking edifice on the high bluff became known as Gillette’s Castle. Today the castle is a Connecticut State Park and is open to the public.

Join us on a special tour, at a particularly wonderful time of year — the holiday season in New England.

We arrived at Gillette’s Castle just before it was to open to the public for Christmas. We made arrangements with the state to have the privilege of photographing the castle just after the staff had put the final touches on the holiday trimmings. 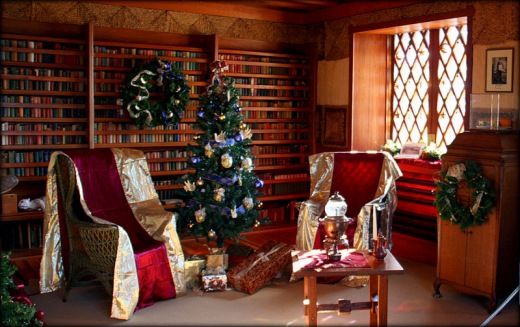 With the exception of a ranger, we were alone in the vast 24-room castle. As we photographed the rooms, we sensed an inexplicable aura of peace and tranquility about the place, possibly actuated by some manifestation of gentle ghosts of bygone Christmases.

Past reasons to decorate

John Gillette had entertained many theater and important holiday guests during his nearly 20-years of residence at the castle.  He passed away while living at the castle three months after the Christmas of 1936. He was 83. 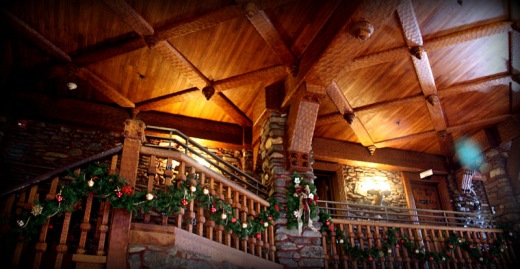 A most unusual home

There is much to discover here that is not immediately obvious. It is reputed that no nails were used in the construction of Gillette’s Castle – ingenious if true. Beams are held into place with large iron rods, stone is used as an art form as well as an engineering necessity.

Each room in the castle is like a character in one of Gillette’s plays. Light streams through the fretted windows of every chamber, illuminating each to a warm yuletide mood.

One curious mystery is why Gillette used hospital style white metal beds throughout his castle. 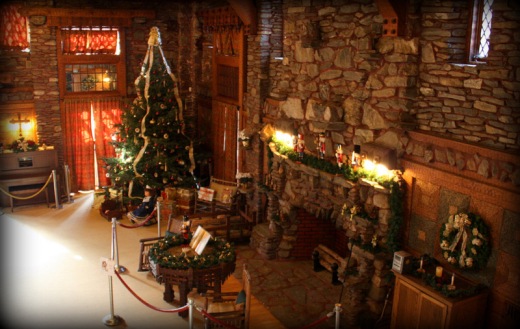 A visit to Gillette Castle during the winter holiday season is a step across the threshold of Christmas past. It’s an introspective experience that we highly recommend.

The park is at 67 River Road in East Haddam, Connecticut. Check out the website *here*

For more ideas about what to see and do in Connecticut check out www.ctvisit.com

For more of our joyous holiday experiences in Connecticut, click here.

Whenever we travel, we are protected by Allianz Travel  travel insurance.

We arrived at Gillette’s Castle, in East Haddam, Connecticut, just as the staff had put the final touches on the holiday trimmings. 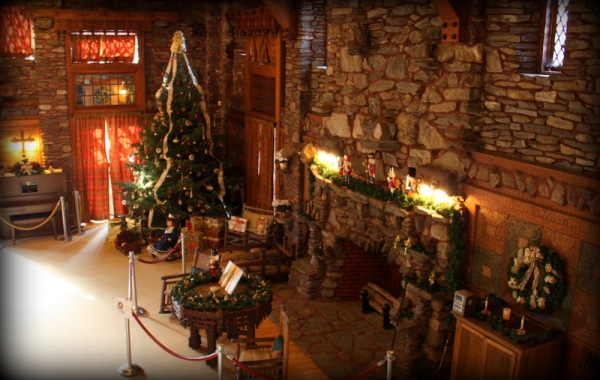 We were almost alone in the vast castle, and as we photographed each room, we sensed an aura of serenity and contentment about the place, possibly actuated by some manifestation of gentle ghosts of Christmases Past – and all the wonderful decorations that surrounded us.

This is the story of how the castle came to be.

William Gillette was a renowned American actor and playwright who portrayed Sherlock Holmes over 1300 times in stage adaptions of Arthur Conan Doyle’s mystery novels in the late 19th and early 20th centuries.

Gillette’s long popularity on stage, and added fame from starring in early silent films, including one called “Sherlock Holmes,” brought him a commensurate fortune and a desire for off-stage seclusion.

At a point in his career, he looked to bucolic Connecticut for his solitude, and in 1914 he commissioned a strange and mysterious 24-room castle to be constructed on a 184-acre bluff overlooking the Connecticut River.

Gillette personally designed the anomalous castle and many of its interior furnishings. He called his estate “The Seventh Sister,” because the purlieu was the southernmost of the Seven Sisters Hills that stretch along the Connecticut River Valley. The castle was built to Gillette’s exact specifications and completed in 1919. 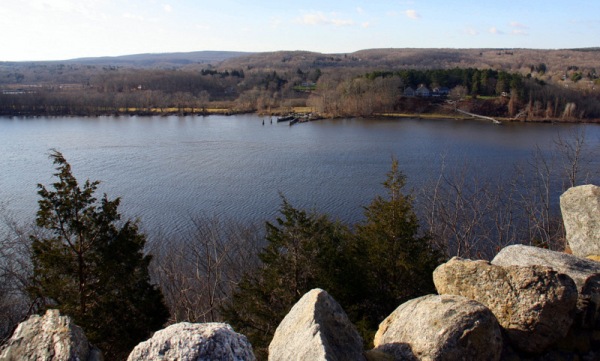 There are stunning views of the shimmering waters of the Connecticut River far below – it is exquisitely serene.

Gillette was a celebrity in many spheres of influence. Stage, radio, film, books, and he held at least five US patents – one for the first sophisticated sound effects machine. Much of Gillette’s creative genius is displayed in his castle. Visitors will quickly see that he took a different approach to defining country living for the aristocracy of his time.

William Gillette created what is believed to be the first fire sprinkler systems used in a building. A huge white metal tank containing water was installed in a room high above the main floor and could be activated by a valve that would spray water through pipes installed in the ceiling.

Another feature of the castle is its unique indoor surveillance system. Designed more for fun than spying, Gillette arranged mirrors in the Great Hall so he could observe the coming and going of people in the house from his bedroom.

From his bedroom position he could also see reflections of guests trying to open his mysterious liquor cabinet. Gillette took great pleasure in watching frustrated visitors, and then magically appearing to solve the enigma of the locked cabinet – just as Sherlock Holmes would have done.

There is much to discover here that is not immediately obvious. It is reputed that no nails were used in the construction of Gillette’s Castle – ingenious if true. Beams are held into place with large iron rods, stone is used as an art form as well as an engineering necessity. 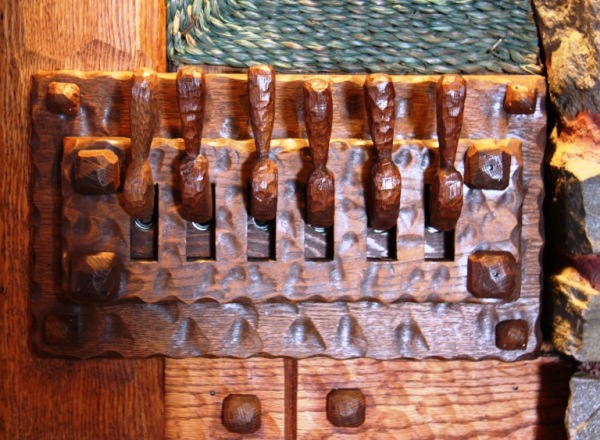 Light switches are made of carved wood, as are door mechanisms and window blocks. 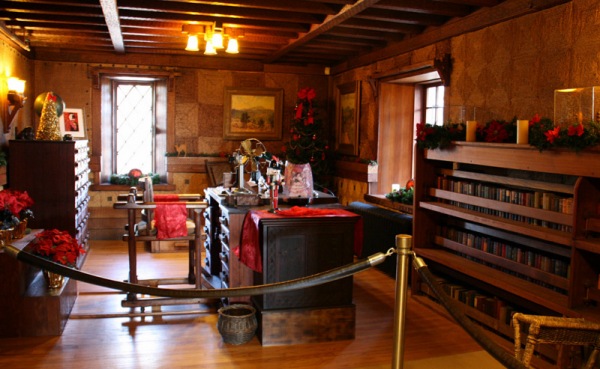 Each room in the castle is like a character in one of Gillette’s plays. Light streams through the fretted windows of every chamber, illuminating each to an unusual mood.

One curious mystery is why Gillette used hospital style white metal beds throughout his castle.

William Gillette registered his cruiser-houseboat in the name of “Aunt Polly” in 1905. He added 40-feet to her length, making her 144 feet long, and she was almost 19 feet wide. She weighed 200 tons, and had all the comforts of a luxury yacht for the time.

The story of the Aunt Polly is as significant in Gillette’s life as was his Seventh Sister estate home.

William Gillette was married only once, and his beloved wife Helen died in 1888, just a few years after the nuptials – they had no children.

After Helen’s death, William secluded himself in Thousand Pines, his 500-acre summer estate in Tryon, North Carolina where he resided off-and-on until 1910. At that time in his life he was suffering from an illness some thought was tuberculosis. A local resident he called “Aunt Polly” nursed Gillette back to health, and as one token of his gratitude he named his cherished cruising houseboat after her.

It was also at Thousand Pines that Gillette showed his skill at wood carving and his admiration for house cats. Henry Zecher, in his book entitled William Gillette, America’s Sherlock Holmes indicates that Gillette had as many as 75 cats living in and around his dwelling on the estate.

The Aunt Polly was moored at the base of the Seventh Sister for the four-year term of the castle’s construction. Gillette enjoyed living aboard the Polly with his favorite cat “Angelina” who shared a nightly dinner at his table.

The Aunt Polly burned at her dock in 1935, but fortunately several furnishings including a piano were saved and moved to the castle where they are currently displayed. 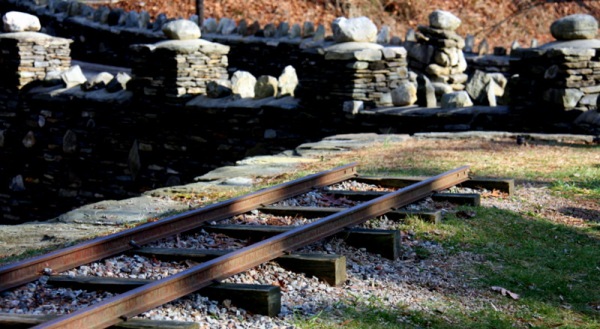 The estate had its own railroad and Gillette enjoyed commanding the throttle and touring guests along three-miles of narrow gauge track at speeds up to 20-miles per hour. After Gillette’s death in 1937, the engine and railroad cars were sold. 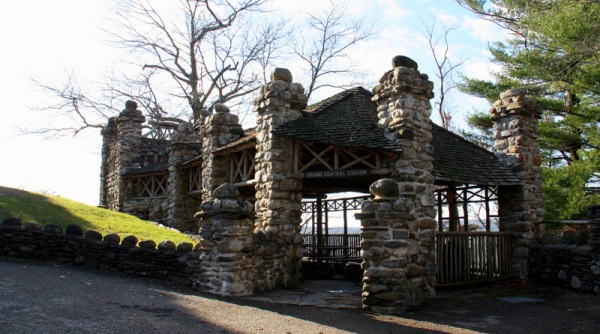 with stone carvings of Gillette’s beloved cats sitting on the roof. Had the railroad been maintained, it would no doubt add greatly to the attraction of the castle, but at the expense of some wonderful hiking trails that replaced the tracks.

The state of Connecticut acquired the Seventh Sister estate in 1943 and converted it to Gillette Castle State Park.

Gillette’s Castle is a top tourist attraction in Connecticut. The park’s substantial Visitor’s Center was closed during our visit, but we are told that it is an excellent introduction to the castle and grounds – and should not be missed.  For more information about Gillette’s Castle State Park look at their website here.

A visit into Gillette Castle is a step across the threshold of time to a golden era where personal luxury was a given and attention to architectural detail a watchword. We recommend the experience hardily.

The park is located at 67 River Road in East Haddam, Connecticut.

Note: The famous Goodspeed Opera House is just across the river and less than five miles from the castle.

Need places to stay while visiting Connecticut? Read these stories and recommendations by Wayne and Judy:

The Mayflower Inn: The best of Connecticut resorts and spas

The Curtis House: Welcoming wayfarers before the American Revolution

Delamar Greenwich Harbor Hotel: By land or sea the place to be

Rock Hall: The best B&B along the backroads of northwestern Connecticut

Photos © Judy Bayliff – old photos are retakes of pictures on display in the castle.